What I Learned from a Horse 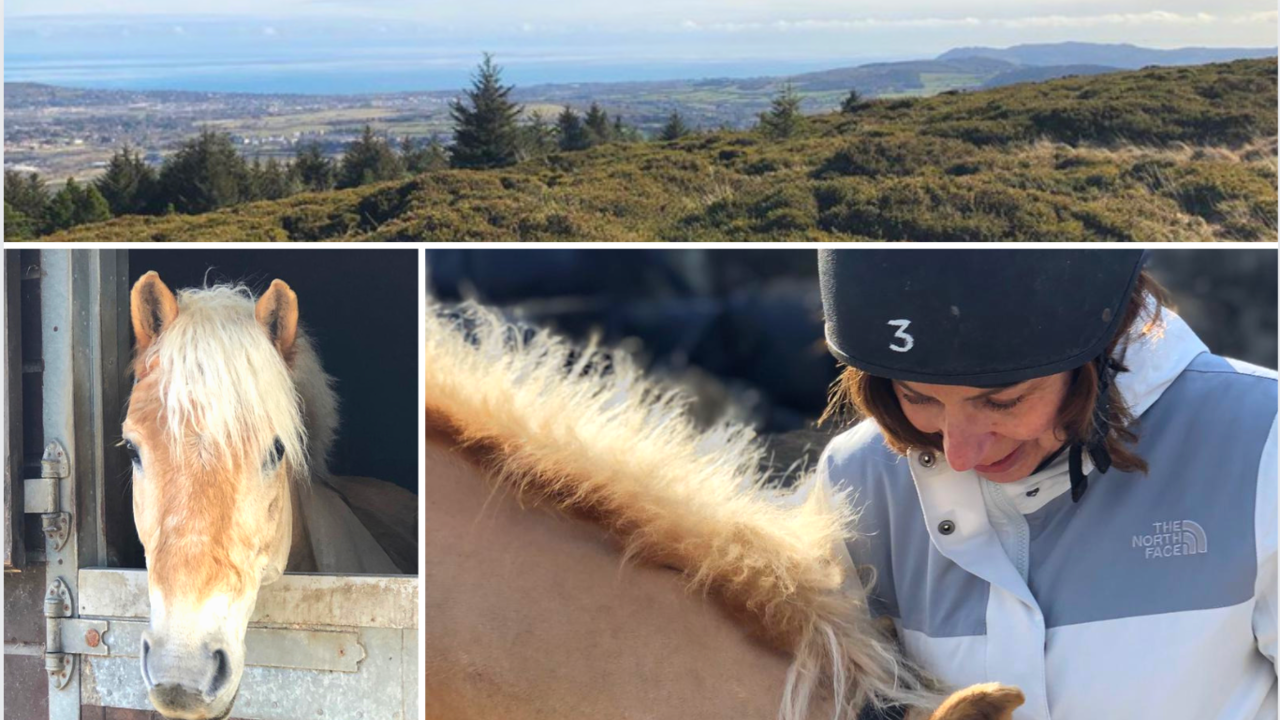 My friend Alison and I were in Dublin with other friends, attending a class.  She had found a stable just outside Dublin.  The website showed spectacular views, through woods, up in the hills, looking down on the city of Dublin and the ocean … hard to resist!

On the day of the ride, the sun was shining, soft blue Irish ocean sky with puffy clouds.

“This is Divo,” she said, as she handed the reins over to me.  “He’s a real sweetheart.”  He was a scruffy looking horse, various shades of blond, brown and white, with muddy legs, short mane and crinkly forelock.  “Hello,” I said to him, delighted, assuming that sweet meant he would be complacent.

Nothing could have been farther from the truth!

Immediately, he began tugging away from me, butting me with his head, then with his body.  He tried to pull me across the yard.  I was horrified!  “I don’t think this is going to work,” I said to the guide, who was saddling up the other riders.  “He really is a sweetheart on the trail.  He’ll be fine, once we get going!” she said reassuringly.

I let go of the reins as he shook his head dramatically and forcefully, then made a beeline for a pile of hay on the other side of the yard.  “It’s ok, he can eat.  He likes to eat.  It’s how he’s gotten such a big belly,” the guide said … to reassure me?

There were four of us riding, and, our guide.  After all the other riders were on their horses, it was my turn.  I picked up the reins and pulled on them, to move him away from the hay and over to the center of the courtyard.  He would have none of it, jerking the reins out of my hand.

The tears began to well up.  “I look like a fool, he hates me, he’s going to buck me off, I don’t want to ride him…”  were the thoughts racing through my head.

“I don’t think this is going to work,” I implored the guide.

“He’ll really be fine … he’s just impatient … he doesn’t like to wait … he wants to get going,” she said, adding as she saw my face, “and if you really want, I can find another horse for you.”

Relieved that I had a choice, I turned to Alison, who is magical with horses.  Somehow deep within, I knew he would be fine … it’s just that it didn’t seem possible, based on how he and I were being with each other in the moment.

“Did you ask him if he would take care of you?”  she asked me.

“Yes, and I got yes he will, and then he started acting like this.”

He stood quietly as I mounted, and then, started up again.  Since he was still tugging and jerking, Roland, one of the stable hands walked with us to the first gate, his hand firmly holding Divo’s reins.  Alternately Roland whispered and gruffed at him to “be good.”  Divo began to settle down.  So did I.

Beyond the second gate, we entered the woods, heading uphill.  It was wet, green, rocky and muddy. So quiet and breathtakingly beautiful.

Divo was still antsy, biting the rear end of any horse that had the audacity to get in between him and the lead horse, Rusty.  Clearly agitated and unhappy, he pranced, trying to push them away and nipping at them.

The guide suggested that he would do better if he was directly behind her and Rusty.  “They are best friends … we have riding Wednesday to Saturday, and then the horses are in the fields Sunday to Tuesday, where they are loose and get to run.  Rusty and Divo spend all their time together, running, playing … they are inseparable,” she explained.  “He’s a bit possessive, jealous really,” she said.

Once Divo was able to walk directly behind Rusty, unchallenged by the other horses, he calmed down.

As I relaxed into the beauty and peace of the woods and the gentle rocking of Divo, these words of my friend Gary rang in my ears:

Everything I know, I learned from a horse.
- Gary Douglas

Could I learn from Divo, I wondered?

As I asked, pictures came flooding into me … of how impatient I am when people are slow and don’t move at my speed … of how irritated I can become when someone tells me I can’t do something I want to do, and how it makes me want to do it even more … of how protective I am of people I am close to, pushing others away, becoming like a mama bear when someone else is mean to them or threatens them in any way, or gets in between us …

I smiled when I realized how alike we actually were.

There was something else though …

Each time we stopped to wait for the horse that was walking slower than the rest of them, Divo would try to eat.  “He can always find something to eat,” the guide said, watching as he actually pulled a couple of green leaves out of a pile of dried pine needles on the ground.

And I started playing with him.  Sometimes I would let him eat, other times not.  And I noticed that as I became less tentative, more taking charge, he settled down even more.  I began to direct him, with no emotion, just, “Yes, you’re going to do this,” or “No, you’re not going to do that.” And it was so easy … all I had to do was think at him what I wanted, and, he did it.

And he loved the ‘lovin’ … the pats on the neck, the whispers of what a good boy he was, the gratitude … His ears turned back towards me when I spoke.

There was something about me leading, stepping up, speaking up, not reacting, being tuned in to him, trusting myself, being present with him and what he required in order to stay upright and not slip on the rocks … that he invited me to and that he was asking for.  And, once I did, he relaxed … and so did I.  He did take care of me, making the ride easy and peaceful.  And it required that I be totally 100% present, letting him choose where to walk on the trail when it was slippery and muddy and steep.  There was a sense of connection, of communion between us.

At the stable again, I dismounted.  He turned around to me and nuzzled his head on my tummy, closing his eyes.  The sensation in my body was one of joy and peace and gratitude.  Long gone were the impatience and despair.

He was led to his stall by one of the stable hands.

I went to see him one last time.  As I rounded the corner, there he was, leaning out of his stall, looking in my direction.  He made that schnuffly, snorting, welcoming noise.  I thanked him again and my eyes filled as he nuzzled me.  Overcome, I turned to walk away.  And …  BAM!  I stopped!  Had he kicked the stall?  It got my attention!  I turned to him again.  And this time he greeted me with that impish look in his eyes, nipping gently at my neck, chewing on my jacket, rubbing my neck and my back and the side of my head, making me laugh, filling us with joy!

We were then ready to say goodbye.

I am so grateful for him.

Thank you, Divo!  You are indeed a real sweetheart … and so much more!